Cooking with the Movies

Food has always been a key ingredient on the big screen, yet no book has ever been devoted to recreating the meals served in famous films. Now, for film buffs--and anyone else whose mouth has watered over on-screen culinary delights--there is the delicious Cooking with the Movies: Meals on Reels.

Cooking with the Movies recreates featured meals from 14 noted films--including "Babette's Feast," "Big Night," "Chocolat," "Goodfellas," "Tampopo," "Titanic," and "Tortilla Soup"--that span a wide range of cuisines and cultures, from French to Mexican to Japanese. Each chapter provides the menu and full recipes for preparing and cooking the dishes depicted on screen, with photos of how each can be served. Along with precise directions, the authors analyze the importance of the foods served and the context of the meals in the storyline of the film. Illuminated with plot summaries, dialogue from the movies, and, when possible, interviews with actors or directors, Cooking with the Movies provides fascinating behind-the-scenes insights for "foodies" and film buffs alike.

Co-author Rayner W. Hesse, Jr. is a retired Episcopal priest serving parishes on the Delaware and Maryland shores. He is also the author of Jewelrymaking through History: An Encyclopedia. 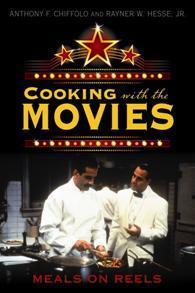